The Nintendo Switch Single-handedly reignited my passion for gaming.

I’m an Xbox guy, the 360 is one of my favourite consoles of all time and due to staff discount at the time where I worked part-time whilst at university it forms the largest of my game libraries. However, the Xbox One library was not so engaging and over the years my time spent gaming slowly dwindled. At this time I only had the one console setup, my other consoles were in storage due to limited space and as the main focus of mainstream games was online multiplayer and the lack of must-play games my interest dried up.

Throw work into the mix, as my career progressed I naturally had less time as portions of my evenings were set aside for personal development, freelance and any overflow from the day. But when all was said and done I would always escape to a game to relax, but during this time that firmly became my classic go-to’s: anything from the Civilization series on PC, or Pro Evolution Soccer on the console. And that was it.

I wanted the Switch for the portability as I was going to be flying more often for work, and obviously as a huge Zelda fan, for Breath of the Wild. So in December 2017, I pulled the trigger.

I hadn’t considered the extra game time this would allow me to have whilst sat on the sofa with my wife, she could watch something she wanted and I could get lost in Hyrule without laying claim to the TV for the whole night.
The bundle I bought came packaged with Mario Odyssey and the red Joycons. I bought Zelda alongside it – and that was the first game I played on the system, and other than downloading Mario and checking out for a half-hour, it was all I played until March. After 250 wonderful hours put into Zelda I moved on to Mario Odyssey and my Gawd, it scratched a whole other itch I didn’t know I had and I was equally enthralled.

Nintendo’s focus on incredibly crafted single-player games restored my faith in the industry, and it led to me making the space and setting up as many of my old consoles as possible to enjoy games from the past when this was the main focus, and multiplayer was couch co-op.

In October 2018 our son was born. As anyone that has gone through this fundamental change knows, in those first few months you have little time and energy remaining for anything else outside of their needs, however, I’m also a firm believer that you have to hold on to something of your identity from before you were a parent (or I think you’d actually go insane), and the Switch allowed me to dip in and out of games whenever the chance arose.

Jasper would sleep at most for 2 hours at a time those first 8 weeks, and each cycle where I wasn’t also napping I’d manage to carve out 30 mins to an hour to jump into whatever I was playing, often with Jasper asleep on my chest and holding the switch up until the blood drained from my hands.

On that note, a key bit of kit I bought that first week and that I now swear by for handheld mode: Satisfy Slim Grip and Case

I highly recommend this fantastic grip and travel case, I can’t use the switch in handheld without it. If it is of interest to you please purchase via the link above to help support the blog, but please note that model is not compatible with the Switch Lite, they do make them, but as I’ve not used it myself I can not vouch for that model.

The tabletop mode was also VERY handy, I could prop it up (far easier in the grip above which doubles as a stand) and have YouTube on it, or detach the JoyCons and continue playing with my arms resting by my sides.

Becoming a Father opened me up to a magnitude of games I may never have been exposed to otherwise given my previous tastes: N++, Snake Pass, Into the Breach spring to mind as ‘pick up and play’ gems I discovered. The NES games were added to the subscription service around this time also and I fondly remember completing Super Mario Bros 3 for the first time over the course of a few mornings with Jasper curled up on my chest. Those and many others got me through and gave me some much-needed snippets of me-time no matter where in the house I was, or what time it was whilst Jasper slept.

As things stand this change has shifted what I look for in a games console and gaming itself. I can’t wait to play Red Dead Redemption 2, I bought it cheap a year after its release, and I’ve only put it on twice for an hour per session so far and not gone back to it for a few months. Vast games like that are some of my favourites, but at present, I can’t invest the time a game like that requires to get the enjoyment I need in the little time I have available for my hobby. I’d much rather stick on a Mega Drive or Master System game and know I can get really far or maybe even complete it in the hour I have, rather than chip away at a 100-hour long adventure.

So my advice to any new parents or parents to be; get yourself a Nintendo Switch or Switch Lite (as you’ll mainly use handheld for the first few months anyway), and then blow the cobwebs off your childhood consoles. Short and snappy feel-good experiences will pay their weight in gold in those small pockets of time you find yourself in… and if the little ones take an interest in gaming, you’ll ensure they’ve had some exposure to the classics.

If you do make a purchase through the above links thank you so very much for supporting this blog. 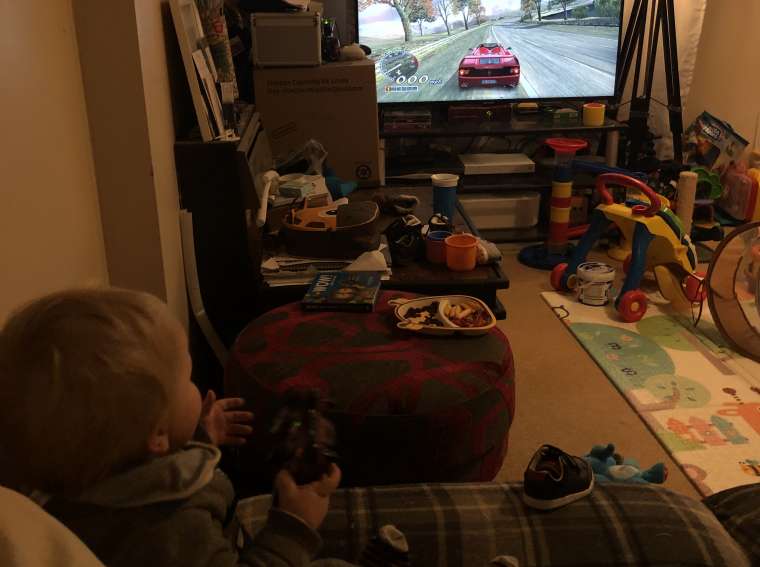 Hail to the King, Baby Xbox